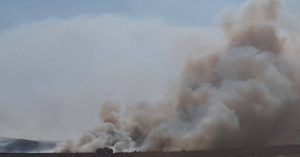 A plume of wildfire smoke is visible at Big Ridge Farms, which is located above the Grand Coulee Dam in eastern Washington state. (Photo courtesy of Jake George)

Smoke and ash from the record wildfires in the western U.S. are slowing the growth of outdoor marijuana plants and forcing cultivators to rethink when to harvest their crop.

MJBizDaily takeaway: Growers in California, Oregon and Washington state are struggling at how to best maximize the value of their grows and minimize their losses.

They face difficult decisions, such as whether to harvest undeveloped plants and suffer much lower yields, or harvest later but risk losses from a freeze or early snow.

The bigger picture is how marijuana businesses can adapt cultivation strategies in response to climate change impacts, including more frequent extreme weather events.

Medical marijuana markets are making the jump to recreational marijuana far faster than before, as public support increases and state regulators learn what works and what doesn’t from states that rolled out markets earlier.

MJBizDaily takeaway: This could bode well for the growth of new adult-use markets – Pennsylvania is an example of a state with a young medical marijuana market that is already eyeing adult-use legalization.

A speedier market transition benefits companies that have the capital to take advantage of the opportunities.

It also increasingly calls for marijuana operators to gain early footholds in medical marijuana markets, since existing MMJ operators are often getting the first crack at adult-use licenses.

MJBizDaily takeaway: The quarterly report highlighted strong growth in some of the Ontario Cannabis Store’s offerings, which could indicate a reduction in the illicit market in the country’s most populous province.

At the very least, the data suggests efforts are headed in the right direction.

Ontario regulators also are making strides in accelerating private-sector store licensing after lagging behind other provinces. That also could help curb the illicit market and grow legal sales.

Los Angeles-based Kushy Punch could be fined up to $498 million for allegedly producing marijuana gummies and other raw cannabis materials for nearly 18 months in 2018 and 2019 at an unlicensed facility.

That’s according to a recent civil lawsuit filed by the California attorney general, which showed Kushy Punch’s alleged illicit activity was more extensive than first believed.

MJBizDaily takeaway: The case shows how critical it is for marijuana businesses to be compliant with regulations.

While regulators across the country have shown more flexibility during the coronavirus pandemic in terms of product ordering and delivery, industry insiders say marijuana businesses should expect continued stiff enforcement overall.

MJBizDaily takeaway: Sales are running at more than $2 million a month, meaning the market is on pace to exceed a Marijuana Business Factbook projection of $20 million to $24 million for 2021.

Although it’s too early to know for certain, the market seems to be shaping up for business licensees to do well, and sustained growth could put pressure on lawmakers to expand or loosen a restrictive program.

Federal lawmakers, at the last minute, gave hemp farmers a one-year reprieve to comply with U.S. Department of Agriculture rules.

MJBizDaily takeaway: The extension, sought aggressively by industry groups and some states, averts a chaotic and costly situation in which hemp farmers in many states wouldn’t have been able to legally harvest, process or sell what they grew.

Industry groups had argued that the USDA hemp rules were too restrictive to comply with by the Nov. 1 effective date, and many states were waiting for the USDA to approve their plans.

Jeff Smith can be reached at [email protected]