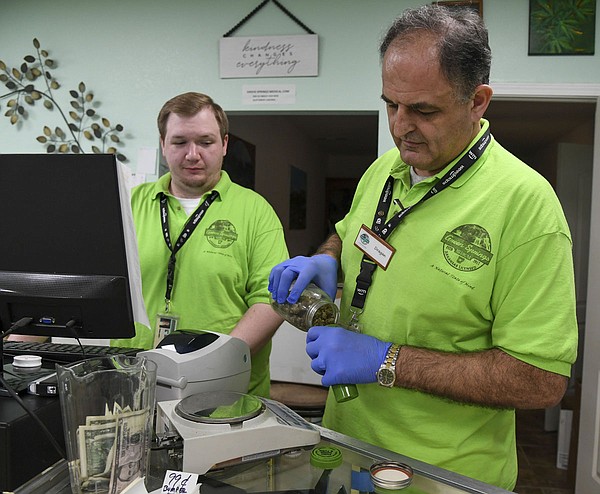 A product shortage is behind Green Springs Medical’s shrinking market share, the principal of the local medical marijuana dispensary said.

Dragan Vicentic, CEO of the only licensed dispensary in the city limits of Hot Springs, said his sales have slowed because cultivators won’t fill his orders.

“We have made one strain available at cost so that patients on a budget can purchase their medicine,” said Vicentic, whose dispensary has reported more than 3,000 pounds in sales, the most of any of the more than two dozen locations operating statewide, since it opened in May 2019. “So what began to happen by late last year is that patients that were purchasing their medicine on the black market began to come to Green Springs from all four corners of the state, because of our one strain at cost program, which ended up being cheaper than buying from the streets.

“That program worked nicely for a long time until around the first of June 2020, when we noticed that we were not able to get the volume of product that we were ordering.”

According to the minutes from the Medical Marijuana Commission’s June 16 meeting, Vicentic addressed the panel about the need for more cultivators. He said he has paid a price for his candor, claiming cultivators retaliated with “childish and unfair” trade practices.

“My next orders from the cultivators fell on deaf ears,” he said, explaining that his comments contributed to the commission issuing the remaining three cultivation licenses allowed by Amendment 98, which made marijuana legal for medicinal purposes in Arkansas. “I was then blackballed by all of the cultivators from purchasing any products.”

Vicentic said Natural State Medicinals in White Hall eventually resumed filling orders for Green Springs but claimed other growers have frozen him out.

“They will not sell to Green Springs, basically because we were the whistleblower telling (Alcoholic Beverage Control) and (Medical Marijuana Commission) that we needed more cultivators,” he said. ” … We have and will always be advocates for the medical patients of Arkansas. We were merely disclosing to the ABC and MMC that we needed more cultivators. Now, most of the cultivators have used this as a tool to drive prices back up that Green Springs was instrumental in making low.”

Other dispensaries have complained on their social media accounts about shortages, specifically a lack of lower-cost strains of the marijuana flower.

Four of the five growers the Medical Marijuana Commission initially licensed are selling product. The remaining three licenses allowed by Amendment 98 have since been awarded, but Vicentic said it will take four to six months for the growers to build their facilities and bring their product to market.

According to information from the Arkansas Department of Health, it had issued 83,779 medical marijuana patient cards as of Friday. The state revenue agency said dispensaries have reported more than $140 million in sales since the state’s first legal sale of the drug was transacted in May 2019.

“Ultimately, time will tell if there is a shortage of product across the state,” ABC, the agency that enforces the Medical Marijuana Commission’s regulations, said in an email. “The most prominent issue regarding a shortage is specific strains that are utilized by patients across the state. We are aware of scenarios in which these popular strains are unavailable for a brief time period.

“As four more cultivators are added to the market, we may clearly determine if the 80,000-plus patients in the state have an adequate supply of product. Amendment 98 limited the number of cultivators to eight and dispensaries to 40. We are receiving consistent feedback encouraging the commission to issue additional cultivation licenses. Expanding the number of cultivators would take Arkansans either accepting this via a statewide vote or potentially an act of the Arkansas Legislature, with certain thresholds for the vote as it would amend the state Constitution.”

Green Springs and other dispensaries have said cultivators with ownership interests in dispensaries are giving those locations’ orders priority over those unaffiliated with growers. Vicentic raised this concern to ABC last year, according to an email the agency provided in response to a records request.

Vicentic was referring to the September 2019 ownership change the commission approved for what was then Doctor’s Orders RX, the 4897 Malvern Ave. dispensary where the state’s first legal sale of marijuana was made. Ownership was transferred to a company led by Mark Drennan, who owns a 24.5% stake in Cotton Plant-based cultivator BOLD Team, according to paperwork he filed with the commission.

Sales at Suite 443, the new name of the Malvern Avenue dispensary, have taken off in recent months, surpassing those reported by Green Springs. It’s finished no worse than fourth in the last four sales reports released by the state revenue agency, while Green Springs has slipped to third, eighth, 12th and 11th after leading the reports for more than a year.

Drennan declined to comment on Vicentic’s claims when contacted by phone Thursday.

The Medical Marijuana Commission and ABC said they don’t have the authority to mediate disputes between dispensaries and growers.

“The agency, including ABC/MMC/DFA, does not have any authority or oversight that would allow it to intervene,” the spokesperson for the three agencies said. “This is strictly a business issue between permitted companies.

“Amendment 98 did not provide ABC or the MMC authority to act or intervene regarding a cultivator’s choice with which companies to do business. In the absence of this oversight, ABC does not serve as an arbiter but remains aware of the situation.”

Vicentic said the state’s inability to intercede makes litigation his only recourse, a process he said could take years to resolve his concerns.

“If not the last issue, it’s certainly close to the last issue I ever thought I would be involved in, but I have a friend with terminal liver cancer and a friend with ALS,” he said Friday. “Both have explained to me how it helps them a great deal in different ways and have a concern about their ability to get it and to get it at a reasonable price.”

Clark said voters endorsed Amendment 98 to help sick people, but he said the ballot language and regulations that proceeded from it were crafted to enrich those with the wherewithal to profit from the drug’s legalization.

“It’s a terrible law, because it was designed in a way, in my opinion, by people who wanted to make money for themselves, however that’s what we have,” he said. “That was my reason for being against it, not because I’m against medical marijuana. It was because it was a terrible law. Sometimes people don’t separate policy from the actual law.”

Clark said the imperfections of the law notwithstanding, it needs to be executed in a way that delivers the drug to sick people at the lowest price possible.

“I want to be sure that he gets it, and I want to be sure he gets it at a reasonable price,” he said of his friend with ALS. “All of their squabbles about how many millions they make is not my concern. That’s who the people thought they were trying to help, my friend. The amendment was designed to help the grower and retailer, but the people who voted for it, that’s not who they were trying to help.”